Edinburgh’s tech sector will go from strength to strength after a partnership between Informatics Ventures and the Data-Driven Innovation Initiative was announced at the annual international technology investor event, Engage Invest Exploit (EIE). 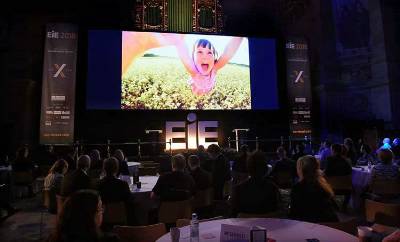 The Data-Driven Innovation initiative is part of the Edinburgh and South East Scotland City Region Deal, and aims to help organisations and all citizens benefit from the data revolution.

Scotland’s capital is the best location in the UK for establishing a technology company, according to the Tech Nation 2018 Report.  Boasting successes such as Skyscanner and Fanduel, and with the backing of the £1.3 billion Edinburgh and South East Scotland City Region Deal, Edinburgh’s tech eco-system continues to thrive as it aspires to become The Data Capital of Europe.

The EIE event has already helped over 350 companies attract over £650m of funding since its inception twelve years ago and last week’s event saw another 50 companies pitch to potential investors.

The partnership will support the launch of even more spin-out companies, attract startups, as well as supporting established tech businesses to seek investment.

Steve Ewing, director of operations at Informatics Ventures, which runs Engage Invest Exploit (EIE), said: “Informatics Ventures and EIE were at the genesis of, and remain very much at the heart of, the data-driven technology entrepreneur ecosystem in Scotland and our reputation for excellence spreads far beyond. Partnering in this way with the Data-Driven Innovation initiative will help us to launch, nurture and showcase more spinouts and startups in the EIE programme and, in so doing, help turbo boost the region’s economy. Looking to the future, Informatics Ventures and EIE are uniquely placed to play a transformative role in realising our joint ambition to make this region the Data Capital of Europe.”

Jarmo Eskilinen, Director of the Data-driven Innovation Initiative, said: “EIE is a hugely respected showcase of talent and passion, a brilliant selection of start-ups in the burgeoning digital ecosystem of the Edinburgh City Region. The event shows why data-driven innovation was adopted as a key part of the Edinburgh and South East Scotland City Region Deal.

“The City Region Deal’s Data-Driven Innovation programme aims to grow the ecosystem bigger and wider, driving investment and growth, so I’m delighted to partner with EIE as they move into their second decade as Scotland’s flagship event for tech investment. Together we can turn Data Capital of Europe from an idea to reality, doing data right.”